Canada Is Shutting Down Its Borders Over The Coronavirus Pandemic, Prime Minister Announces 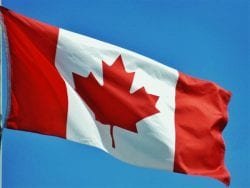 Canadian Prime Minister Justin Trudeau announced that his government will be closing its borders to all non-citizens and anyone else who isn’t a permanent resident, while U.S. citizens are exempt “for the moment.”

In response to the worldwide coronavirus pandemic, Trudeau on Monday announced that Canada would begin refusing entry to all people who are not citizens or permanent residents of Canada, and could possibly include American citizens as part of this ban. The announcement was made during a press conference in Ottawa, the country’s capital city.

“We can still slow the spread of this virus,” Trudeau said during the press conference. “It is time to take every precaution to keep people safe.”

However, the prime minister did lay out certain exceptions besides U.S. citizens.

“This measure will carve out some designated exceptions, including for air crews, diplomats, immediate family members of Canadian citizens and, at this time, U.S. citizens,” he added.

Trudeau said the U.S. and Canada were “collaborating very closely” when asked why Americans were exempt from the temporary ban, and he added that “the level of integration of our two countries is quite particular.”

“We recognize that the level of integration of our two economies and the coordination that we’ve had over the past while puts the U.S. in a separate category from the rest of the world,” the prime minister said.

The announcement follows revelation that Trudeau’s wife, Sophie Gregoire, tested positive for COVID-19 just days earlier. While the prime minister has not tested positive himself, or has shown any symptoms, he has remained in isolation as a precautionary measure.

Additionally, air operators are being required to refuse individuals who show symptoms of coronavirus to board a plane. Operators will have to conduct a basic health assessment of every traveler who wishes to board a flight.

During Monday’s press conference, Trudeau urged all Canadians traveling aboard to return quickly.

“Let me be clear, if you’re abroad, it’s time to come home,” the prime minister said.

Content created by The Daily Caller News Foundation is available without charge to any eligible news publisher that can provide a large audience. For licensing opportunities of our original content, please contact licensing@dailycallernewsfoundation.org.

Canada Is Shutting Down Its Borders Over The Coronavirus Pandemic, Prime Minister Announces is original content from Conservative Daily News – Where Americans go for news, current events and commentary they can trust – Conservative News Website for U.S. News, Political Cartoons and more.