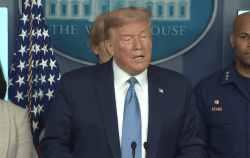 Financial disclosures show that Trump does not currently own stock in Thermo Fisher Scientific and hasn’t since before he took office in 2017.

In a move not usual for countries with adequate scientific capabilities, the U.S. had the Centers for Disease Control and Prevention (CDC) developed its own COVID-19 testing kits. Numerous fact-checkers have previously debunked the claim that the U.S. rejected World Health Organization test kits.

The CDC-developed test protocols require that labs use Thermo Fisher Scientific products, including its Applied Biosystems 7500 Fast Dx Real-time PCR instrument, according to CDC testing instructions. Some people, including journalist Amee Vanderpool, expressed concern that Trump would profit from testing for COVID-19, the disease caused by the new coronavirus.

Similar sentiments also circulated on social media: “So Trump turned down the WHO testing kits in February,” claimed a March 7 post. “Lo and behold the CDC has ordered kits to be made by a company Trump is a stockholder in – Thermo Fisher Scientific.”

There is, however, no evidence that Trump currently owns Thermo Fisher Scientific stock. He owned between $500,001 and $1 million worth of the company’s stock in 2015 and less than $1,001 worth in 2016, but financial disclosures show he had divested from the company by the time he took office in January 2017.

Vanderpool’s article, headlined “Trump Could Profit From Coronavirus Testing,” appears to have first made the claim, citing an outdated 2016 story from The Associated Press. She later updated the story to reflect the fact that Trump’s recent financial disclosures show no evidence he owns stock in the company, but by that time the initial allegation had already spread across the internet.

FACT CHECK: Is Donald Trump A Stockholder In Thermo Fisher Scientific? is original content from Conservative Daily News – Where Americans go for news, current events and commentary they can trust – Conservative News Website for U.S. News, Political Cartoons and more.

Mr. President, Please Declare Your Emergency And Build The Wall!

Pennsylvania lawmakers find there were more votes than voters