FLASHBACK To March 3: Bill De Blasio Asks New Yorkers To Ignore Coronavirus And Get On With Their Lives 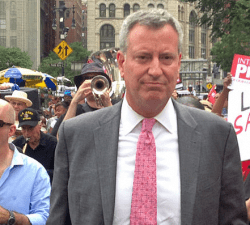 New York City Mayor Bill de Blasio was dismissing the impact of the coronavirus nearly two weeks before blasting President Donald Trump for not mobilizing the military to confront the virus.

De Blasio told Meet The Press’ Chuck Todd on March 22 that he asked Trump to mobilize the military to take the virus head on. He went on to suggest that if the president doesn’t act immediately, then “people will die who could have lived otherwise.”

He made similar comments a week prior, telling MSNBC’s Joy Reid on March 14 that the virus is “a war-like situation … We’re in a wartime scenario with a Mar-a-Lago attitude being used by the federal government.” De Blasio was singing a different tune earlier in March.

“Since I’m encouraging New Yorkers to go on with your lives + get out on the town despite Coronavirus,” the Democrat told his Twitter followers on March 3, no more than two weeks before likening the outbreak to a type of World War that required nationalizing industries.

De Blasio went on to offer some suggestions for what New Yorkers should do instead of social distancing  “I thought I would offer some suggestions. Here’s the first: thru Thurs 3/5 go see “The Traitor,” he said, referring to a 2019 crime drama about the life and times of a Mafia mob boss.

Meanwhile, media pundits lambasted Trump for supposedly not acting fast enough to address the virus despite his decision in January to institute a travel ban on China, where the coronavirus, or COVID-19 originated.

De Blasio’s office has not responded to the Daily Caller News Foundation’s request for comment regarding his change of heart.

FLASHBACK To March 3: Bill De Blasio Asks New Yorkers To Ignore Coronavirus And Get On With Their Lives is original content from Conservative Daily News – Where Americans go for news, current events and commentary they can trust – Conservative News Website for U.S. News, Political Cartoons and more.

What Would It Take To Repeal The 2nd Amendment

Did Scotus Make A Mistake With Ruling To Allow Lawsuit Against Gun Manufacturers?