While I have an issue with slandering a faith just because you dislike it, speaking to truth is not slander, it’s simply speaking the truth. Of all faiths in the world today, you only have one that is trying to make any criticism of it illegal around the world, questioning its founder, teaching, or political leanings a death sentence in many nations, that would be Islam. Free speech is coming under more and more pressure as Islam has spread, increasing this pressure in Western Nations has been grown exponentially by the waves of Islamic migrants rushing to Europe and the West, bring with them their idea’s and believe that any criticism of Islam should result in death.

Before I get started, I want to say, this is not a hit piece on the faith of Islam, it is, however, a call to attention on the political movement called Islam, the movement that demands the right to subjugate and condemn every other faith but then is offended if one does so back.

We saw in the Obama years the global initiative to ban any criticism of Islam, in the UN they had a bill that was put forward to make all member states make it a crime to question the faith or speak out against it or their prophet. We have seen nations bow to this pressure, what used to be bastions of free speech and thought are now making it criminal to speak out against Islam. To name a few:

This is just the Western nations where free speech is under fire, if you go to Islamic nations that have a Muslim majority it is dead, you will be put in prison or even tried and put to death if you are caught questioning any teachings of Islam or ask questions about their prophet. While I have no issue with showing respect for ones right to faith, I have a huge problem with these same people who openly attack other faiths asking for criminal prosecution if it is done back. As Europe has come under a wave of Islamic migrants, many of them bring with them the belief that any criticism of their faith or prophet should carry a death penalty, and as we have seen time after time, they have no issue with carrying such an action out.

In these Islamic nations, speaking out against Islam or their prophet brings imprisonment and death:

In these, you get imprisoned (that is if the mob doesn’t kill you first):

In this nation, one of the few, you can face imprisonment, but this applies to attacks on all faiths. 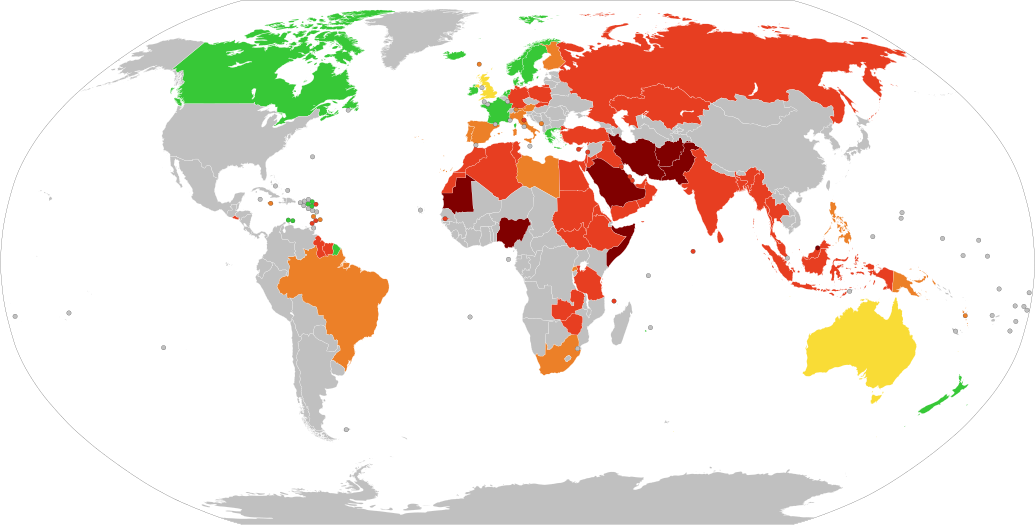 As Europe is coming more and more under the pressure of these migrants, the demands to bring Sharia Law, put in place the blasphemy laws, even calls for death of anyone who dares speak out against Islam are rising in force, sadly the leaders of the countries have sold out to this pressure and started to enact these laws to appease this new population. There is, however, one slight problem, to date there has never been a prosecution of Muslims criticising Christianity or demeaning its prophets or apostles, this seems to be applied only one way (and for you saying this is not true, then please, feel free in the comments to share one documented case where a Muslim has been prosecuted for attacking Christianity or Judaism).

Now I don’t wish to get back into the issues caused by demographics as Muslim migration, or inner population growth causes a rise in the population of Muslims within a nation, one can look to my article “GUIDE TO ISLAM AND ISLAMIC EXTREMISM” (I will include a link at the end of the article to this) to see the ties, but in the west, we based our civilizations around the concept of free speech, while some speech is destastful, as a Jew I can attest to the hate speech and how discomforting it can be, you don’t silence bad speech by imprisoning, you fight it with the truth and by educating the listener. Exposing bad speech with truth takes away from the appeal of bad or wrongful speech, trying to silence it only makes others wonder why you think it is such a threat and what are you hiding.

What is most disquieting about this is not the fact that insults or questioning one’s belief, pointing out the problem of a faith and its imposition on others around it, instead this seems contained to one religion, and that is at the expense of all others. I must ask, when are we going to stop handling Islam with kid gloves, to question all faiths, is not evil, nor is it a thing to be denied, if you halt this, you risk having a very uneducated populous, for they then will not be educated on both sides of the issue.

Even more significant, why do we give into this faith, allow them to dictate to us that they can’t be questioned, that any research into their history, their proclivity to violence is seen as an attack on their faith, and even if it is, they do the same to other religions, so why do they think they are immune to this?

To seek wisdom and truth is the bases of knowledge, to hide any part of it denies us the chance of knowing the whole truth, this shouldn’t ever be allowed, all need to be exposed to the light of truth; if a faith, teaching, or dogma can’t stand the light questions, the truth is not the problem, what is being looked at is. We have seen humanity grow over time because people dared to question the Church in the age of enlightenment, people like Galileo, Michelangelo and others, the great ones that stood up to what was perceived as the truth, challenged it, their actions brought us out of the dark ages and into the age of enlightenment. As we saw the teachings of the church questioned so long ago, we need to be able to do the same to Islam or any other faith, including mainstream Christianity or Judaism today.

Guide to Islam And Islamic Extremism

The Left’s War Against Faith

The Left’s Switch And Bait

Islam – The Religion Of Peace?

AG Barr Says He Will Now Investigate The Investigators and Instigators