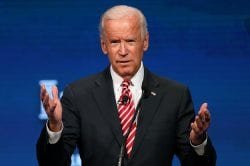 Democrats are always calling Trump a racist now their own candidate outdid anything Trump said that was racist and revealed his true feeings.

Former Vice President Joe Biden (D) declared Friday morning that if black Americans are unsure whether to support him over President Donald Trump in the November election, “then you ain’t black.”

That’s right Joe Biden thinks he owns all the black voters and if you want to be black and a Democrat you have to vote for him and step in line or what?

Biden made the unsolicited racially-charged remark as he departed his virtual interview with Breakfast Club co-host Charlamagne tha God.“If you have a problem figuring out whether you’re for me or Trump, then you ain’t black,” Biden told Charlamagne, not in response to any question, but to the host’s statement: “It’s a long way until November, we’ve got more questions.”

In September, Charlamagne called out Biden for offering to send a campaign surrogate instead of sitting down for an interview with the radio host, saying the move by the candidate demonstrates “white entitlement and privilege.”

“Joe Biden has offered to send his surrogate, so that tells me a lot about what Joe Biden thinks about our audience. I think Joe Biden might be suffering from that same white entitlement and privilege and ego where he’s just that old school white male who feels like ‘hey man, they need me, I don’t need them or I’ve got them already.’ That’s not respect,” he lamented in an interview with CNN.

“It don’t have nothing to do with Trump, it has to do with the fact — I want something for my community,” the radio host shot back.

After the African American community expressed outrage for 2020 presidential hopeful Joe Biden saying “you ain’t black if you didn’t vote for me” Biden was forced to issue an apology.

At first, Biden’s campaign tried to spin the former VP’s comment as a joke saying. The comments made at the end of the Breakfast Club interview were in jest, but let’s be clear about what the VP was saying: he was making the distinction that he would put his record with the African American community up against Trump’s any day. Period.

But it was dust and ashes in his mouth the damage was done. He said it. He can’t take it back. He actually believes the crap. Why else would he say it? He wasn’t compelled or coerced into saying it. It came from his heart, his mind, and his soul, and it exposes him for what he is, a manipulative RACIST acting like an Uncle Tom.

Candace Owens said Biden and the Democrat party view black people as “trained chimpanzees who should not ask questions, but perform the same circus act every 4 years.”

Rap mogul Sean “Diddy” Combs scolded Biden and said, “I already told you the black vote ain’t free.”So now he’s attempting to do some damage control with an ‘apology.’

Joe Biden looked a black man in the eyes today & said that he didn’t need to worry about black media because of a black person has to decide between voting Biden or Trump then they aren’t black. This is the most racist thing I’ve ever heard out of a Presidential candidate.

Where’s the NAACP on this crap? The last 3 letters in NAACP stands for the Advancement of Colored People. JOE BIDEN obviously  doesn’t think people of color can think for themselves because they don’t have the level of intelligence required otherwise he would never had said those horrible words. If that’s not a supreme racist the I don’t know what is and has no business holding office.

This is why they very rarely let Joe Biden do anything that isn’t completely controlled and scripted. Sometimes he accidentally says what he thinks. Like how he, a 77-year-old white man, should be the arbiter of how Black people should act.

Biden’s comment reminds me of when Hillary went on a black radio station and said she always carries a jar of hot sauce in her purse.

Republicans have NEVER hinted a single time they own blacks. Think about it. Republicans passed the 13th amendment, the Democrats opposed it.

The Democrats have always counted on the Black vote and always make promises but do not keep them thus keeping blacks down and constantly on their side, But now? I don’t think so. The only time the Dems treated anyone nicely was in an election year.

Under Trump we have the lowest unemployment rate for blacks in history and 20% of the black race supports him because of all the jobs they are getting. Kanye West is a big Trump supporter and he has a huge following.

Times have changed. It is now impossible to be an American and vote Democrat. Certainly impossible to be a LOYAL American and vote Democrat. A vote for a Democrat is a vote for the destruction of our Constitution, and ultimately, the destruction of our existence as a free Republic! How ANYBODY can support these America-hating SOCIOPATHS is something I just can’t understand.

Biden, not only is CORRUPT and has been for his entire career. He is a LIAR and a sexual predator who cannot be trusted around women of any age.

Creepy old Joe, cannot even complete a sentence without stumbling and bumbling over every word, is just pathetic. Can you imagine him talking to world leaders????? Having a debate with Trump???? That will be like bringing a KNIFE to a GUN fight. We are doomed.

Even Sheila Jackson-Lee is schooling creepy, sleepy Joe about his “You ain’t black” comment. ALL the Black Dems are turning against Joe. Maybe they are waking up finally and leaving the plantation….in droves

He really needs to be tested for Dementia and the results made public. I believe a PET scan would be appropriate

White Jesus Is Demanded to Be torn Down, Stain Glass Windows Removed, Apartheid Against Whites Is Coming To America

US Should Pull Out Of UN Human Rights Council