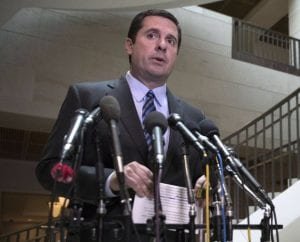 California Rep. Devin Nunes said Saturday that he expects to file more criminal referrals based on new revelations from the Justice Department inspector general’s investigation of the FBI’s probe of the Trump campaign.

Nunes, the top Republican on the House Intelligence Committee, has already filed eight criminal referrals related to the U.S. government’s investigation of the Trump campaign. He said in an interview on “Fox & Friends” that he anticipates filing additional referrals based on information in a series of footnotes from the IG’s report that was revealed on Friday.

“I would say that people should go and look at those footnotes that are now public. Likely we’re going to have more criminal referrals based on these,” Nunes said.

Two Senate Republicans published newly declassified footnotes from the IG report that showed that the FBI received evidence in 2017 that the Steele dossier contained Russian disinformation.

The footnotes said that the FBI was provided evidence that Russians fed dossier author Christopher Steele disinformation related to former Trump lawyer Michael Cohen and a trip that Donald Trump made to Moscow in 2013.

The footnotes also said that an FBI unit raised concerns in 2015 about Steele’s work for Russian oligarchs.

FBI agents failed to disclose the information in applications for Foreign Intelligence Surveillance Act orders against former Trump aide Carter Page. That despite the dossier being “central and essential” to the FBI’s applications for the spy warrants.

Nunes also asserted that one implication of the footnotes is that Democrats spread Russian disinformation by using Steele’s allegations to accuse Trump of colluding with the Kremlin.

He said it “never made sense” that the Clinton “that they know is supposedly getting information from Russian intel folks. That doesn’t pass the straight face test.”

One Capitol Hill staffer who worked on the Trump-Russia probe summed up Schiff’s role to the Daily Caller News Foundation on Friday following the release of the footnotes.