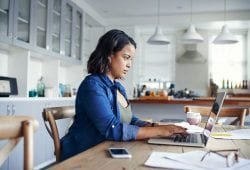 Facebook and Twitter’s decision to allow their workers to telecommute permanently could shake up Silicon Valley’s demographics and potentially lead to red states turning purple as people continue bailing on California for Texas and Arizona, among other states.

At least 50% of Facebook’s workforce could begin working remotely over the next decade, Facebook CEO Mark Zuckerberg said during a CNBC interview Thursday. Facebook historically hasn’t been receptive to letting workers meander far from its Menlo Park campus but the coronavirus outbreak, which has killed nearly 100,000 people in the United States, changed all that.

Twitter CEO Jack Dorsey made a similar pronouncement on May 12, telling his employees that many are allowed to permanently work from home. He extended a similar offer to staff at his other company, Square.

Other tech companies are following suit. Coinbase announced plans to prioritize telework, and e-commerce company Shopify said most of its employees will continue working remotely over the next year.

The moves raise an important question: will tech employees make tracks for red states across the western frontier?

Such mass movements will “accelerate the purpling or even blueing of Mountain West states like Arizona, Utah, and Idaho. California out-migration has long driven growth trends in states like those,” the Brookings Institution’s Mark Muro told The Daily Caller News Foundation. His past research demonstrates the extent to which coastal hubs are monopolizing the tech industry.

Muro has published articles in the past arguing that the tech industry in California is widening the gap between opulent metropolitan sectors and rural areas.

“Over-concentration in a short list of coastal agglomerations is driving costs up, creating livability crises, and turning tech into its own echo chamber working on a narrow slice of topics. Tech’s diffusion would allow entrepreneurs to save money,” and give  different people an opportunity to “contribute their ideas,” he added.

California lost an estimated 190,000 residents in 2018, which accounts for births in California that year and is based on state-to-state migration, according to an analysis CNBC Special Correspondent Jane Wells conducted of the 2019 U.S. Census. The numbers were similar in 2017, when about 130,000 residents left the state as high costs left many people with few opportunities.

Median monthly rent for a Los Angeles one-bedroom apartment is $2,300, while it’s more than $3,400 in San Francisco, according to industry tracker Zumper.

Meanwhile, the rental price for a one-bedroom unit is $925 in Las Vegas and $945 in Phoenix. Some of the most popular areas for Californians from 2015 to 2017 were Texas, Arizona, Oregon, Washington and Colorado, United Van Lines data shows. Nevada remains a top destination, other experts also said.

Common destinations for outgoing Californians were Arizona, Colorado, Nevada, Oregon, Texas and Washington, according to William Frey, a senior fellow at the Brookings Institution. He told the Los Angeles Times in 2019 that Californians are drawn to these places for two big reasons: Washington, Texas and Nevada do not have an income tax and they are inexpensive relative to California.

This trend could increase as California’s economy dips. Gov. Gavin Newsom’s stay-at-home orders in March forced non-essential businesses to close, prompting millions of Californians to file for unemployment. The Democratic governor’s administration is predicting that the state will hit 18% unemployment after registering a 3.9% unemployment rate at the start of 2020.

Still, one California Democrat is marking a note of optimism even as California faces the prospect of bleeding even more residents over the next several years.

“This is a game changing proposal, and I applaud Facebook for taking this step,” Democratic Rep. Ro Khanna told The Washington Post Friday. He proposed spending nearly $1 trillion in February on a plan to create mini tech hubs through federal research to counter President Donald Trump’s messaging.

“All Americans, regardless of where they live, should be able to participate in the digital revolution,” said Khanna, who represents Silicon Valley. “It should not have taken covid for us to realize this, but I’m glad that tech companies like Facebook and Twitter will allow people to work remotely and not have to move for a good-paying job in tech.”

Why Are the Media Ignoring Political Threats and Intimidation?