South Africa Returns to Apartheid, With A Twist!

If you were born before the ’70s, remember apartheid in South Africa, the world outrage over the evil that was part of national law is something you can’t forget easily, but one has to ask, it has returned, why is there no outrage now? It turns out the twist is this is now against whites, which seems that is fine with the world today, and this is going on in South Africa, but many nations in Africa are doing this as well.

So where is this sean? One first needs to look at the number of deaths in South Africa since Nelson Mandela and the communist African National Congress (ANC) took over South Africa. More than 70,000 whites have been murdered, and untold numbers have been robbed, raped, and tortured. These figures are during the Obama Administration, yet the silence from the left and his administration, while not surprising, shows the reality of their outlook. It seems the left thinks this is justified.

Today there are cases of rape, murder, terrorizing the white population, yet the government refuses to do something about it; one has to ask, why no world outrage, or is this only evil when done against a black population? The problem with this type of outlook is your risk and put in place the same type of environment you had in the 1920s when Fascism raised its ugly head; we see the same thing going on in much of the world, the self-hatred of the white leftist are moving many that would remain neutral to feel they are under fire, this is in many cases pushing them towards of the arms of radical racist groups.

So what can be done? First, the ANC or communist African National Congress has shown sympathy for radical terrorist groups like Hezbollah and Hamas; we give tacit approval to this type of sympathy by ignoring what they are doing both at home and abroad. In this, we see the further exposure of the DNC; even though they claim they have left their racist ways of the past, the reality is they haven’t, just changed the direction of their hatred. They still hate the Jews, even though there are many self-hating Jews in their midst, but they seem to have a great amount of company; they also have a whole bunch of self-hating whites spewing garbage about ‘White Privilege,’ flogging themselves for the unfortunate circumstances that had them be born white.

We have seen this grow from bad to worse; Julius Malema, leader of the Marxist Economic Freedom Fighters (EFF) party in South Africa, brought a motion that called for a constitutional amendment to allow the confiscation of white-owned land without compensation. To open his motion, he declared, “The time for reconciliation is over. Now is the time for justice.” I will be the first to say that the acts of South Africa under Apartheid were horrible, the world was justified to bring an end to their terror on one group of people due to the color of their skin, but to ignore the same thing now being done in reverse makes it no better, how can you yell it about when it goes one way then zip your lips and sit on your hands when it goes the other? This is not justice; this is racism, a policy that has been perpetrated by the far left, pushed by Obama, and now is openly practiced today. 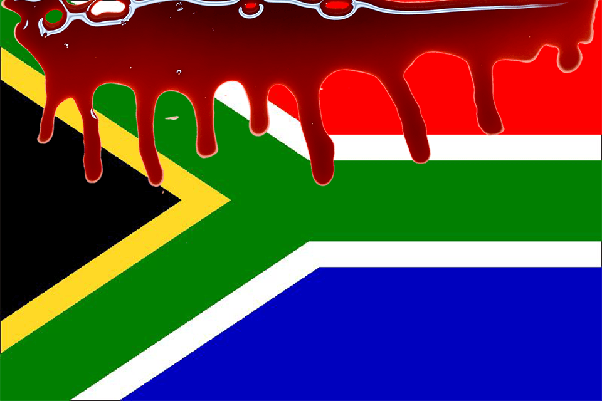 Things are at a boiling point that it would not take much to send South Africa into a frenzy killing spree of their white citizens; the world is turning a blind eye to the hate that drips from the ANC’s lips. The ex-ANC Youth League President, Julius Malema, defied a court ruling that banned the ANC from singing “Kill the Boer” just hours after he left the court. The courts are run by “racist whites,” according to the ANC Youth League, and they don’t have any respect for any ruling unless it is in their favor.

As time has gone by, we have seen this rhetoric rise; on 18 June 2012, Lamola told ANCYL members that “Land reform needs an act as forceful as war” and that it was an illusion that land would be given back to black South Africans “peacefully.”

You now have cases of rape; in one case, a grandmother was raped by two young men when they left, she crawled to the phone and called the police since she was white, they waited hours before they sent the police to check on her, guess even their police are now following this new apartheid.

As things spiral out of control, the whites in the country are at risk of being slaughtered; it is time to stop this. We forced once an end to apartheid, now it is time to end this new apartheid, or we risk a slaughter while we sit and act like all is well. While the new political fad of hatred against whites is fashionable, it doesn’t mean that it has to be acceptable.

With Elon Musk Now The Largest Stockholder Of Twitter, On the Board of Directors, Could Change Be Coming?

House Democrats Pass Bill To Give Illegal Aliens Health Insurance, Refused To Give The Same To Our Veterans