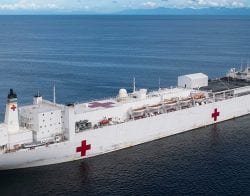 Good and bad I define these terms, quite clear, no doubt somehow—Bob Dylan, My Back Pages.

As with any serious situation facing our country the good comes out with the bad in people, but good always outshines the bad. In a time of crisis you always see the best of America shining through greater than ever. The New England Patriots are importing 1.2 million masks, Arnold Schwartzenegger is donating one million dollars in masks to hospitals all over the country, The TV show The Masked Singer is purchasing 10,000 surgical masks for New York hospitals, Dolly Parton donated one million dollars for corona virus research, KFC is giving one million pieces of chicken to franchisees encouraging them to distribute to communities, Eastern airlines are flying stranded Americans home who were stranded abroad. These are the best in Americans which make up most of America.

The U.S.is now conducting more than 100,000 corona tests per day. The government is now on track to send 100,000 ventilators. FEMA has delivered more than 4 million masks,1.8 million surgical masks,460 thousand face shields,1.4 million gloves, and 4,400 ventilators to New York since New York is the epicenter for this virus. All levels of government in New York have failed miserably even though they have been warned to be prepared ever since 9/11

Skid Row in Los Angles has its’ first case of coronavirus and spreading like wildfire among LA’s 5000 homeless community.

Meanwhile, Nancy Pelosi, Chuck Schumer, and Adam “Schifty” Schiff and their do-nothing democrats are calling for another investigation into Trump saying he didn’t act fast enough in this crisis and could have saved a lot of lives. Really?

Where were they back in January when Trump issued the travel ban that saved thousands of lives? Oh, that’s right they were too consumed with impeachment calling Trump xenophobic and racist rather than helping and saving America.

In the middle of a national pandemic emergency where people are dying and need valuable help, they are calling for a new investigation into Trump. Suddenly, the Trump press conferences are being cut short because the left is touting them as campaign rallies for the President. Due to the COVID-19 outbreak, President Trump and the coronavirus task force have engaged in daily White House press conferences. These conferences provide critical information to Americans regarding COVID-19, developments on the fight against it, CDC guidelines and more. Members of the destroy Trump media like MSNBC and CNN are asking the FCC to ban Trump’s daily briefings that are bringing valuable information to the people.  They claim all he does is lie when it is they who constantly lie and get things wrong and side with the enemy, in this case, China.  To them, the truth is a lie and a lie is the truth so if they accuse Trump of lying he must be telling the Truth. Can you follow that? This is beyond sick.

On Friday, for the first time, Fox News also cut the press conference short, deciding to go with a panel discussion on “The Story with Martha MacCallum.”

After the network cut away, several key speakers took the podium, including Education Secretary Betsy DeVos. One of the bigger missed details was the plan to try to get school lunches delivered to homes that have children to lessen the financial burden on families.

While I will admit Trump sometimes goes off on tangents, which I love by the way it is usually because he is getting hit with either an outright attack by a member of the media or a “gotcha” question to try to trip him up. Those moments have led to media members calling the press conferences nothing more than a daily televised rally for Trump.

This seems more like a way for the media to make Trump look like less of a decisive leader… a way for them to help Joe Biden since he is incapable of helping himself these days.

Whenever I see these comedians and other libs being so mean, nasty and ugly to Trump I can’t help but think of when Sarah Palin was running. They mocked her unmercifully calling her stupid and an airhead then when she appeared on SNL their opinion of her changed. Suddenly they were saying how much fun she was and how nice she was and she wasn’t an airhead after all. It’s the same with Trump. They make fun of him unmercifully, but if they were to meet him in person and sit down with him seriously they would see what a caring and compassionate person he is and  their opinion of him would change because they’ve been so brainwashed by the haters in the media.

The Corona Virus Brings Out The Best In America And The Worst In The Media is original content from Conservative Daily News – Where Americans go for news, current events and commentary they can trust – Conservative News Website for U.S. News, Political Cartoons and more.