The Left’s Most Deranged Conspiracy Theories About Amy Coney Barrett

Although Judge Amy Coney Barrett has been vouched for by colleagues and others who know of her legal background, that hasn’t stopped detractors from conjuring up conspiracy theories about Barrett’s faith, family and intentions should she be confirmed to serve on the highest court in the land.

Barrett’s Catholic faith and large family have been the most common targets of her critics. Her faith has been called “extreme,” and media has attempted to link a faith group associated with Barrett to the fictional dystopian novel “The Handmaid’s Tale.”

Her family, specifically her two adopted children from Haiti, have also been the target of conspiracy theories as some have speculated unethical adoption practices or even racism.

Among the conjecture surrounding Barrett’s faith is the claim that she is part of a religious group that was the inspiration for Margaret Atwood’s “The Handmaid’s Tale.” Multiple news outlets falsely reported that the Christian group People of Praise inspired the novel, and outlets later issued corrections admitting that this connection between the group and the novel was unfounded, the Daily Caller News Foundation reported.

Reuters, for example, published a report said that “some have likened People of Praise, a self-described charismatic Christian community, to the totalitarian, male-dominated society of Margaret Atwood’s dystopian novel ‘The Handmaid’s Tale” and noted that “others call it an ultraconservative group.” The story drew criticism after Reuters tweeted it with the caption: “Handmaid’s Tale? U.S. Supreme Court candidate’s religious community under scrutiny.”

Reuters updated the story, but did not include a correction. The updated title was more anodyne: “As U.S. Supreme Court nomination looms, a religious community draws fresh interest.”

Barrett has not only been attacked for any links with People of Praise, but also for her Catholic faith. Specifically, Democratic California Sen. Dianne Feinstein questioned Barrett’s faith in a 2017 confirmation hearing that gained national attention.

“Why is it that so many of us on this side have this very uncomfortable feeling that dogma and law are two different things, and I think whatever a religion is, it has its own dogma. The law is totally different,” Feinstein said. “The conclusion one draws is that the dogma lives loudly within you,” Feinstein added. “And that’s of concern.”

Democratic Illinois Sen. Dick Durbin also questioned Barrett over an article she co-authored as a law student that included the term “orthodox Catholic,” asking Barrett: “Do you consider yourself an orthodox Catholic?”

The line of questioning about Barrett’s faith, and the implication that Barrett would apply her faith to her duties as a judge, isn’t unusual for Democrats. Senate Democrats were accused of anti-Catholic discrimination in 2018, when they quizzed federal judicial nominee Brian Buescher over his membership with the Knights of Columbus, a Catholic charitable organization. Democratic Senators Kamala Harris and Mazie Hirono were accused of “religious profiling” after probing Buescher over the organization’s views.

“The Knights of Columbus has taken a number of extreme positions,” Hirono said, referring to the group’s opposition to same-sex marriage. “If confirmed, do you intend to end your membership with this organization to avoid any appearance of bias?”

Barrett responded to Durban by affirming her faith and her duties as a judge.

“If you’re asking whether I’m a faithful Catholic, I am, although I would stress that my own personal church affiliation or my religious belief would not bear on the discharge of my duties as a judge,” Barrett told him.

Barrett was characterized as an extremist Catholic. Disgraced former congresswoman Katie Hill tweeted: “If her religion never made it into her court decisions, she can believe what she wants. But, yes, personally, I DO object to any religion that still insists women be subservient.”

The Washington Post’s Ron Charles also called into questioned her intentions with her legal career. “Amy Coney Barrett, the judge at the top of Trump’s list to replace Ruth Bader Ginsburg, has said we should always remember that a ‘legal career is but a means to an end … and that end is building the Kingdom of God,’” Charles tweeted, in a screenshot taken from Twitter by the DCNF. 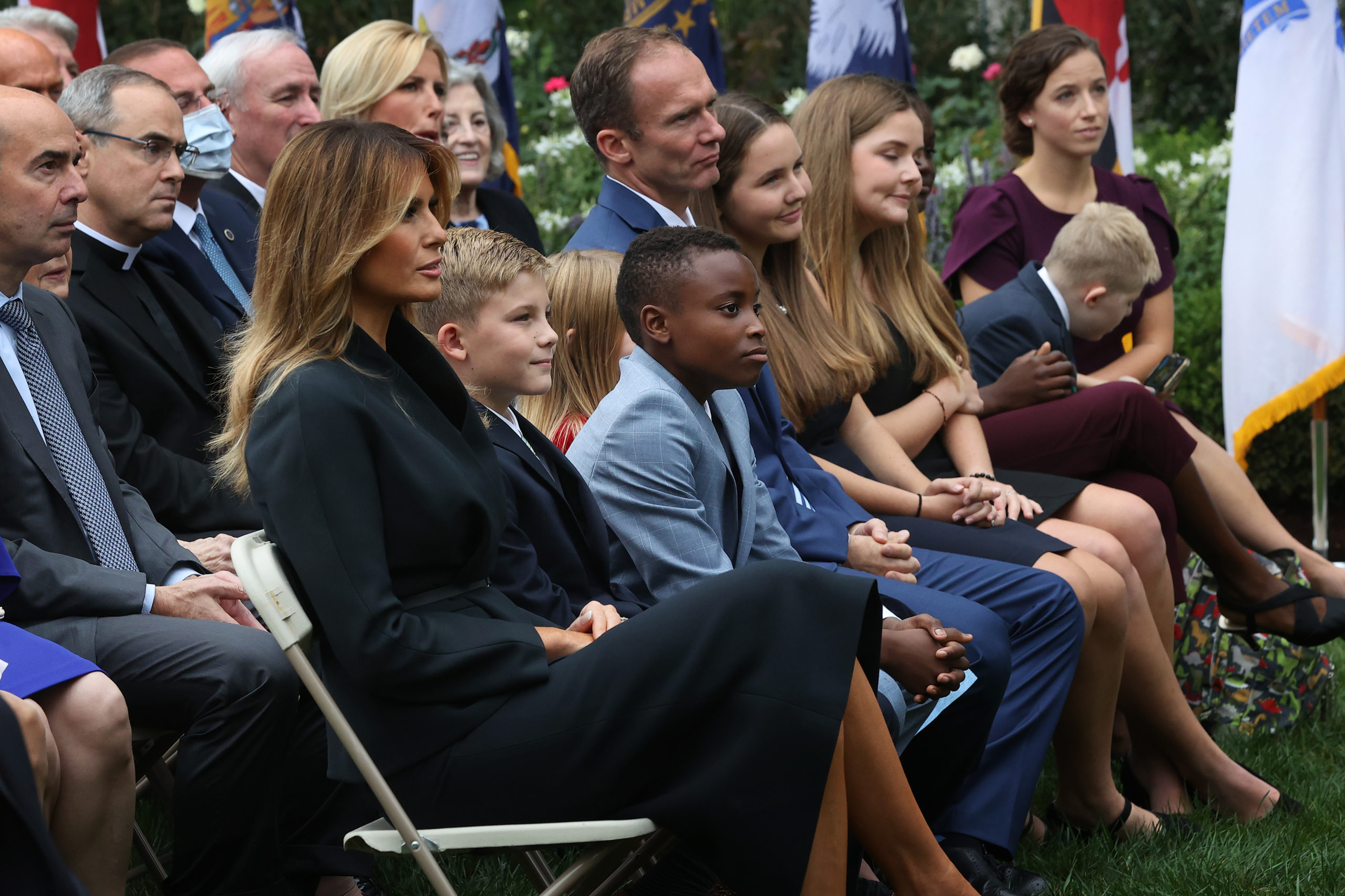 “Vivian is our miracle. Vivian joined our family — she was born in Haiti and she came home when she was 14 months old, and she weighed 11 pounds and she was so weak we were told she might never walk normally or speak,” Barrett said during the 2017 hearings. “Today Vivian is a track star, and I assure you she has no trouble talking.”

“John Peter is 10, and like Vivian, he was born in Haiti,” the nominee added. “He joined our family in 2010 when he was three years old after the devastating earthquake in Haiti.”

“Transracial adoption is fraught with trauma and potential for harm, and everything I see here is deeply concerning,” he said.

Democratic activist Dana Houle said that he would “love to know which adoption agency Amy Coney Barrett and her husband used to adopt the two children they brought here from Haiti.”

“Does the press even investigate details of Barrett’s adoptions from Haiti,” he asked. “Some adoptions from Haiti were legit. Many were sketchy as hell. And if press learned they were unethical and illegal adoptions, would they report it? Or not, bc it involves her children.”

“Some White colonizers ‘adopted’ Black children. They ‘civilized’ these ‘savage’ children in the ‘superior’ ways of White people, while using them as props in their lifelong pictures of denial, while cutting the biological parents of these children out of the picture of humanity,” Kendi tweeted.

“And whether this is Barrett or not is not the point,” he continued. “It is a belief too many White people have: if they have or adopt a child of color, then they can’t be racist.”

Could Attacks Against Mosques Be Caused By Radical Islam?