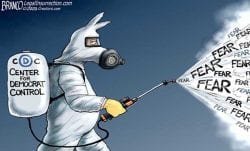 While the coronavirus is a serious matter not to be taken lightly, the destroy Trump media mob and the do-nothing Democrats are using it as a weapon against Trump who is working hard and diligently to protect us from the virus, but it is not going to work just like all their other failed plans against him.

Former White House and Pentagon Official Douglas Mackinnon wrote a very informative article about how the media hysteria over the Carona virus is not as bad as the media and Dems are making it out to be when compared to other past viruses we’ve had. Mackinnon says the Media folks now realize “they opened a pandora’s box and unable to put the lid back on it.”

In his article, MacKinnon said, “When the radioactive dust settles from this orchestrated panic-strategy, potentially hundreds of billions will have been lost, thousands of businesses closed, and millions of employees fired. On Monday, March 9th, 2020, the Dow Jones Industrial Average plunged by 2,000 points.

When the coronavirus first reared its ugly head, many in the media instantly saw it as a cheap and easy way to increase clicks, newspaper sales, viewers, listeners, and most especially ad revenue.

In the guise of “informing the public,” they intended to run scare headlines and stories to spike attention to their sites. And run them, they did.

Except, now even the media executives pushing the scare tactics for hoped-for increased ad revenue have realized they went way too far and opened a Pandora’s Box they are unable to close. The economic devastation ignited by the deliberate panic strategy is spreading like an unchecked wildfire.

In addition to the massive financial loss to our nation and the world is the haunting psychological trauma inflicted on untold millions now terrorized by the prospect of getting the virus.

The panic created over this current coronavirus already far exceeds that of the SARS pandemic of 2003. Seemingly exponentially so.”

Trump has done the right thing from the beginning with putting the travel ban in place on countries like China and South Korea and now canceling flights to and from Europe for 30 days. Meanwhile, the democrats in their hatred for Donald Trump all called him xenophobic and concentrated on his impeachment while he was trying and succeeding in protecting the country and that is exactly what he is doing. No president has acted so quickly to combat a disease. Had he not put the travel ban in place and assembled the Task Force things would have been a lot worse than they are now unlike Obama didn’t do with the Swine Flu H1N1 epidemic where 20,000 people contracted it and 1,200 died from it before he put a national emergency on it. We never had the panic we are now seeing and that was worse here than this one is.

Despite the hair-on-fire reporting of coronavirus news, let’s look at some actual numbers, rather than the scare tactics from CNN or MSNBC. Statistics from the Centers for Disease Control and the Johns Hopkins Coronavirus Dashboard are illustrative.

At the time of this writing, there are 118.000 cases worldwide, with 80,955 in China. China tried to cover up the release of the virus when it was revealed it came from them, 3,646 deaths, and 60,558 recoveries. Fifteen of those deaths occurred in the U.S. The odds of recovering are far higher than the odds of dying.

Cases in mainland China have peaked, with few added cases over the past week. Cases elsewhere are on the rise, following the same pattern as China in early February. Recoveries are rising at an even faster rate.

Anthony Fauci, M.D., of the National Institutes of Health and a member of the Trump administration’s task force, gave some perspective in a New England Journal of Medicine editorial:

The median age of the patients was 59 years, with higher morbidity and mortality among the elderly and among those with coexisting conditions (similar to the situation with influenza).

The overall clinical consequences of Covid-19 may ultimately be more akin to those of severe seasonal influenza. In other words, the coronavirus may be a nastier version of the seasonal flu, potentially fatal for the elderly and infirm. How many Americans die from the flu each day?

According to the CDC influenza and pneumonia caused 55,672 deaths in the U.S. in 2017, or 153 persons per day. All this exaggerated, Dem-induced panic (through the complicit media & CDC’s initial, deliberate, lack of action) works against Trump!

This year so far there are 1,417 cases of corona and 37 deaths with the average age being 80 for people with underlying conditions. There have been 34 million cases of the regular flu and 20,000 deaths from the regular flu. The regular flu is having a greater impact than the coronavirus, but the media is treating this like a series of airplane crashes.

The added bonus is that any negative news can be laid at the feet of a president loathed by the media, who just so happens to be running for re-election. The media are in full campaign mode, trying desperately to drag the carcass of one of their corpse-like candidates across the presidential finish line.

Every democrat came down hard on Trump when he enacted the travel ban from China and now certain European countries yet that was one of the best decisions he made.

According to former Bush Press Secretary Ari Fleischer, Trump is being criticized for the Coronavirus simply because he’s Trump.

People need to use common sense. We supposedly have health professionals in place specifically for such issues. President Trump isn’t a scientist nor a Doctor.  Trump is doing an outstanding job. They blame everything on President Trump because they are so full of hate they cannot see straight.

Stoking fear over quarantines and supply chain disruptions has sent the stock market on a downward roller coaster ride. One of President Trump’s major achievements is the roaring economy. Taking the stock market down 25% or more may help the Democrats. But by the numbers, the economy is still roaring, bolstered by the February jobs report of 273,000 added jobs, more than expected, and record-low 3.5% unemployment.

Recently Donald Trump Jr. took to Fox News’s Fox & Friends segment to speak out against the left’s wish for a coronavirus outbreak in the United States. He called the left’s wish, a new level of sickness.

“Anything that they can use to try to hurt Trump, they will,” the younger Trump stated. “Anything he does in a positive sense, like you heard from the reporter that was just suspended from ABC, they will not give him credit for.”

He continued, “The playbook is old at this point, but for them to try to take a pandemic and seemingly hope that it comes here and kills millions of people so that they can end Donald Trump’s streak of winning is a new level of sickness,” the younger Trump stated. “I don’t know if this is coronavirus or Trump Derangement Syndrome, but these people are infected badly. To run that in The New York Times … it’s truly sick.”

Trump Jr. is referencing a recent New York Times article speaking out against his father. The scathing op-ed blamed the President for the virus and attempted to spread fears and lies about the virus to the public.

The left wants to see an outbreak here just so they can point fingers and blame Trump for something out of his hands. Radical Democrats would wish a pandemic on this country, just to spite its President and now Joe Biden has released an e-mail as a fundraiser for him using the coronavirus to get funds. Shameless indeed!!!

The Media Panic is More Dangerous Than The Coronavirus! is original content from Conservative Daily News – Where Americans go for news, current events and commentary they can trust – Conservative News Website for U.S. News, Political Cartoons and more.