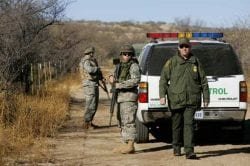 The Department of Defense approved a request to send more than 500 additional troops to the U.S.-Mexico border, with an official saying the move is meant to help manage the coronavirus pandemic.

The Pentagon is deploying 540 military personnel to the U.S. southern border, a spokesman confirmed to the Daily Caller News Foundation on Tuesday. The border — which touts an average of about 5,000 troops assisting Border Patrol agents by conducting non-law enforcement roles — will receive the surge as the Trump administration deals with the quickly-spreading viral outbreak.

“I can confirm that the border RFA has been approved — this happened last night. 540 personnel to the SW border, performing the same kinds of duties already being performed there,” Christian Mitchell, a Pentagon spokesperson, said to the DCNF.

News of the 500 troop surge, a request made by the Department of Homeland Security, was first reported by Reuters.

“Intent is to plus up numbers a bit to help DHS deal with COVID concerns,” Mitchell continued.

The Trump administration is going to great lengths to stop the spread of the coronavirus which, as of Tuesday afternoon, has infected more than 183,500 people and killed more than 3,720 across the U.S.

Acting Secretary of Homeland Security Chad Wolf, per orders from the Centers for Disease Control (CDC), announced on March 20 that the northern and southern borders would be closed to all non-essential traffic to stop the spread of COVID-19, and that nearly all individuals caught illegally crossing into the U.S. would be immediately sent back.

The move has proven effective, with border crossings dropping by roughly half since it was executed.

President Donald Trump originally considered deploying troops to its northern border, but opted not to after push back from the Canadian government — including Prime Minister Justin Trudeau.

‘This Race Resets’: Ari Fleischer Describes ‘What The Democrats Have To Fear’