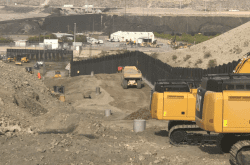 The Trump administration announced a $175 million contract to build barriers along the southern Texas border in areas where no border wall previously existed.

Customs and Border Protection (CBP), in conjunction with the U.S. Army Corps of Engineers, announced Monday that it has awarded a contract totaling $175,577 to build roughly 15 miles of border wall in the Rio Grande Valley Sector, in an area located in Starr County, Texas.

Construction is slated to begin as early as this year, and will include a 30-foot tall steel bollard wall, all-weather roads, enforcement cameras, lighting and other technology in order to “create a complete enforcement zone.”

“RGV is the busiest Sector in the nation and, for the FY to date, accounts for approximately 25% of the illegal alien apprehensions and ranks first in seized cocaine, methamphetamine, and marijuana along the southwest border,” CBP said in a statement Monday. “The majority of its activity is occurring in areas where RGV has limited infrastructure, access and mobility, and technology.”

The contract was awarded to Randy Kinder Excavating, Inc., a construction company based in Missouri. The project itself is being funded by CBP’s fiscal year 2018 and 2019 appropriations.

The barriers — which will be placed in areas along the border that did not previously have border walls — will be made up of four non-contiguous sections, which will connect to other newly-built wall segments. Areas that will see new border wall go up include Rio Grande City, Roma, Escobares, La Grulla, and Salineño, Texas.

News of the latest border contract follows President Donald Trump’s Executive Order 13767, the Border Security and Immigration Enforcement Improvements. The order has allowed Trump to secure additional funding for the wall, helping him reach his most lauded campaign pledge.

Border Patrol Chief Rodney Scott on Monday gave an update on the status of southern border wall construction. So far, 139 miles of wall have been completed, and another 200 miles of wall are under construction. The administration has set an ambitious goal of 400 completed miles by the end of 2020.

CBP is touting the nw barriers set to be built along the Rio Grande Valley Sector, where illegal alien crossings and drug seizures are high.

“These projects will improve the RGV Sector’s ability to impede and deny illegal border crossings and the drug and human smuggling activities of transnational criminal organizations,” the agency read.